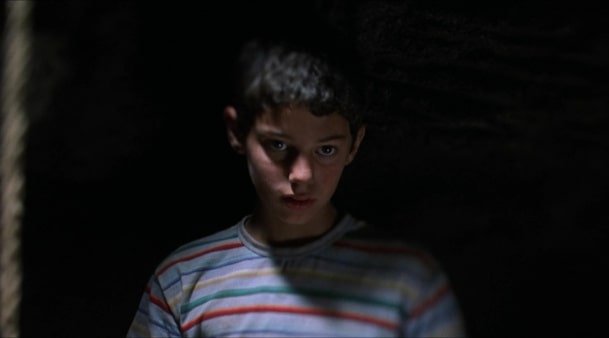 While playing outside one day, nine-year-old Michele discovers Filippo, who is chained to the ground at the bottom of a hole. Michele witnesses town baddie Felice nearby and suspects something bad is happening. Michele is unsure whom he should tell about his discovery, eventually spilling the beans to his closest friend.

I don’t know what it is about Italian directors, but it just seems that they are more interested in making classic movies than their American counterparts. They don’t rely on body counts, car crashes and pyrotechnics. Instead they tell stories and use beautiful images and scenery to enhance it. In “Io non ho paura” we are treated to a coming of age fable that indeed makes one feel young again. We see the world through a ten year old’s eyes and sadly, we see how reality starts to over take the innocence of youth. Michele lives in an economically depressed part of Southern Italy. He has a father that is often absent and surroundings that come straight out of Dickens. However, even with very little, he manages to entertain himself and little sister. One day while retrieving something for his little sister, he makes an odd discovery, a child, living in a hole, far away from anywhere. He soon comes to see that this child is being held captive. Of course, being a ten year old, Michele has many wild ideas about why the child is in the hole. However, as the film progresses, Michele starts to grow up and realize what a harsh world it can be. What really makes this movie are the beautiful shots of Southern Italy, where golden fields go as far as the eye can see. And although the film’s ending is a slight letdown, overall it is still a wonderful film. Here is hoping that some American directors might find their souls and start trying to emulate this type of cinema. Bravo!